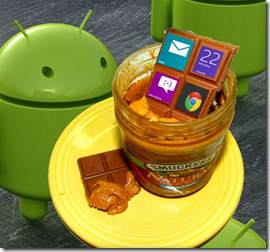 As Intel announced this week it had another tough quarter over last year. There was some light that ties in well with what else is going on in the marketplace.

Intel mentioned it was pinning hopes on 2 new chips, Haswell for higher end laptops and pc’s with Bay Trail taking up the low end for cheaper models.

With Android growing fast in the phone marketplace, but so much in tablets, and Windows struggling more so at this stage, a couple of interesting things happened recently that could change things or offer consumers a nice choice in the next few weeks.

Android announced last week they had released an Intel friendly update to Android (version 4.2.2 Jellybean). Also Intel announced they were releasing faster cheaper chips for the tablet market. See where this is going.

Microsoft has some, but many apps, and let’s face it who wants another 1million apps in the market. Android on the other hand is culling their million apps as we speak to offer better quality and less junk for consumers in their app store.

Microsoft lacks apps, and app developers. Android lacks some business apps, if these two do not work together they may not have to for it to still work. Samsung, Lenovo and others sit in both the Microsoft Camp and Android Google camps.

The advantage of having a windows android hybrids, if able to be switched from easily without a reboot (a feature in the new Android release) see my previous story on this release currently in alpha release.

Personally I would love Android on my Windows Tablet and Vice Versa. These are exciting times.

Loren is an Tex-Cali-English mutt now living in Australia has been in the tech industry for 19 years, his accomplishments include everything from introducing business broadband in 1994 in the UK for British Telecom, SaaS, and Data Centre Services in Australia for NEC Japan and others, debugging iPads for Apple etc.  He has been around so long his 150,000 followers on twitter @mr_internet feel sorry for him and hang around.  He likes telling bad jokes and going to cooking schools (20 countries so far) , and speaking 3rd person about himself.  He blames not getting enough oxygen as a child for some of this. Ask him about his tenor when BT decided to go after Microsoft IE as BT owned the patent on URLs (it isn’t pretty).